Over 1.4k downloads, part of the Bundle For Racial Justice And Equality!

Based off of Graham Walmsley's innovative game Cthulhu Dark, Garrote Couture brings us fabulous models in gorgeous clothing, all trying to get to fashion week events without ruining their ensembles. Every cabby, every bike messenger, even every other model is a potential threat. But you can get there with grace and style, n'est ce pas?

Uses 3d6 per player, plus notecards and pencils.

In order to download this game you must purchase it at or above the minimum price of $4 USD. You will get access to the following files:

Support this game at or above a special price point to receive something exclusive.

Want a copy of this project but can't afford it? Are you a reviewer or blogger? Just want some free stuff? Grab a community copy.

(Buying a PDF copy adds +1 Community Copy to this pool, so give back if you liked it and you're able!)

Garrote Couture has a strong, clever premise, wonderfully thematic layout, and it had me grinning the whole way through.

GC's setup reads a bit like it could also be the setup to a resource-tracking boardgame, and it has some worldbuilding that I would compulsively throw money at if it was the backdrop to a combat-focused trpg (rival fashion houses fighting in the streets,) but on top of that the mechanics are Cthulhu-Dark-based and are both slightly crunchy and satisfying.

There are a few places where the rules are a little unclear though (the game doesn't clarify what an oeuvre is and just expects you to know, the Point A To Point B section is missing the end of its rules text, and it's not clear whether you add dice or just count the highest,) and this can make a first read-through a little confusing.

It's also not spelled out if failing a roll and taking an action that can damage your couture are two separate things that can stack or just the same rule rephrased, and the As A Note section further muddies the water by saying that anyone rolling their couture die takes damage.

This made me think that maybe a simple clause like "whenever your couture die gets involved, if it rolls above your current couture score you gain couture" and then a quick list of the specific situations in which you can roll couture might be a more economical way to present things, but I'm not 100% certain that that's the game's intended rule, and it may be worth reading Cthulhu Dark to interpret the intent.

Rules ambiguity aside, and as someone who knows nothing about fashion is way outside of the game's target demographic, and I would absolutely recommend it to anyone who likes one or two-shot ttrpgs.

GC's fun, its milieu is very possibly one you haven't played in before, and while part of me *really wants* a longer version with a Romeo-And-Juliet's-warring-Verona setting and Smile Down The Runway fashion show mechanics, it's also perfectly fine without changing its scope.

If you're considering picking this up, do it.

This review made me smile. Thank you so much.

No worries. Thank you for creating the game! 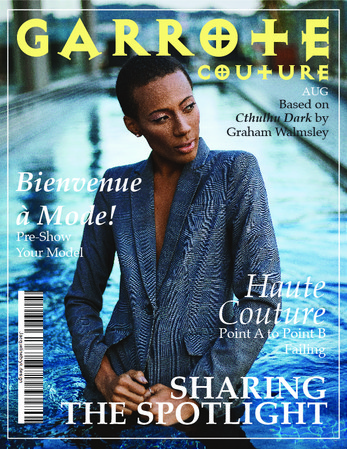