Over 2,700 downloads, part of the Bundle For Racial Justice And Equality!

"If you're going to write a game about serial killers ... play this one first." -fia glas

Your name was on the front page. You were a victim with a number. One, two, three, four, five. When they caught him, your Killer’s full name was splashed across the front page too, along with smaller pictures of the rest of his victims. They wrote hundreds of words dedicated to his motives: what he wanted, why he wanted it, how could such a monster exist among us. You were relegated to his kills, his trophies. He captured the public imagination.

They haven’t heard you since you went missing. Your voice was snuffed out, or added to the background noise of the Killer’s glamour. You became a part of him, part of his past, his present, and his future.

A feminine horror LARP about reclaiming your personhood in the face of someone who wants to take it away, even beyond death.

Illustrations and layout by Mary Georgescu.

In order to download this game you must purchase it at or above the minimum price of $6 USD. You will get access to the following files:

Support this game at or above a special price point to receive something exclusive.

Want a copy of this project but can't afford it? Are you a reviewer or blogger? Just want some free stuff? Grab a community copy.

(Buying a PDF copy adds +1 Community Copy to this pool, so give back if you liked it and you're able!)

It's 12 pages long, with a few low-res but intense illustrations depicting nudity and torment post-death.

It's also a larp where the facilitator plays the lingering presence of an abuser, and specifically a serial killer. Everyone else plays their dead victims.

Content-wise, it's not entirely about helplessness, but it does engage with the way we tend to erase victims and remember killers. It's *also* pretty directly about abuse, and it confronts the way abusers can leave an echo of themselves on their victims, and how people deal with that.

To put it another way, this is Bluebeard's Bride done as a right cross with the boxer's full bodyweight behind it.

I don't think I would recommend Skeleton Song to everyone, but it has some really cool flourishes to it. For one, the killer is never named. Some of the victims are. The killer has a methodology, and it's possible to guess some things about them from it, but it isn't important. The people who were reduced to being victims are the center of the story, and in a way it's about whether they can reclaim themselves from the crime that made the public forget their humanity.

Overall, if you like intense, well-thought-out media, and if you like books or podcasts about serial killers, you should check this out.

I wanted to give this a read even if I couldn't pull together a group for it.

This is the nicest thing anyone has ever done for any of my games, thank you so much. 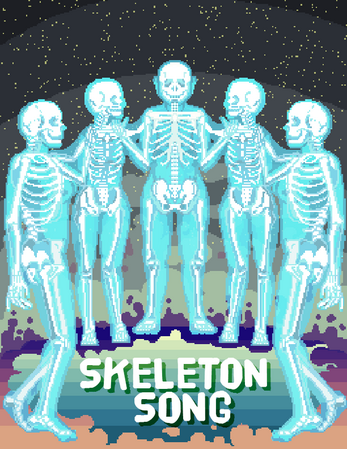